So we’ve come to the end of yet another tortuously long and brutally hot East Tennessee summer. The air is getting crisper, the leaves are turning, and the gridiron is heating up even as baseball’s Boys of Summer are winding down. All of which signals seasonal goodness aplenty at Preservation Pub/Scruffy City Hall/Uncorked/Market Square Cafe.

Such as: The Market Square Rooftop Barhop. We’re in the sweet spot right now — the weather’s still warm, yet just cool enough for comfort. And so the Venues are offering a football-season-only Saturday night rooftop/barhop event that includes nine bars, six bands, four kitchens, three rooftops, two DJs, and a partridge in a pear tree. 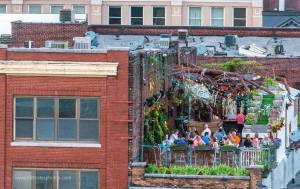 Okay, no, skip that last part. But all the other stuff is true, for the low, low price of only $10. And take note that the rooftop jaunt includes the rooftop at Uncorked (!), which the Benefactors have special dispensation to use for this special autumnal barhop.

And while you are taking in the Scruffy City scenery, please take note of new additions such as the flying pig and flock of flamingos on display on the rooftop of Preservation Pub. The Benefactors had those added to the Pub’s rooftop garden scenery only recently, as a means of giving the Magic Beer Tree a little company during those long, lonely off-hours when the doors are closed and the taps are shut down.

Meanwhile, Market Square Cafe is offering a new fall menu that includes the return of the Scruffy Dog — hot dog goodness with a selection of 18 toppings and sauces. Also on tap is a daily lunch menu, including pulled pork and grits on Monday, Taco Tuesdays, steak and potatoes on Wednedays, pasta on Thursday, Fish and Chips Friday and Saturday afternoon chicken wings.

And while we’re on the subject of food: What the f@#$ is Pho?? If you don’t already know the answer — and especially if you already do — you’ll want to find out at Uncorked. Ask for the new Pho special.

Moving into October, and the Halloween season, know that Scruffy City Hall is hosting a portion of this year’s Knoxville Horror Film Fest 8, Oct. 21 through 23. See the Knoxvillehorrorfest.com website for details, and tickets.

Also, in keeping with seasonal tradition in these parts, look out for everyone’s favorite local Goth electro-pop superstars, Hudson K, and their annual multi-media Halloween spectacular, and for the Coveralls annual costume contest/Halloween performance. Dates on both those shows will be named soon, at Scruffycity.com.

And moving toward Thanksgiving, Nov. 4 through 6 will see yet another edition of the Scruffy City Comedy Festival at Scruffy City Hall. Headliners at this year’s event include Baron Vaughn, Emily Heller, and Trae Crowder.

Finally, we would be remiss if we did not mention that the long-awaited Crystal Cave and Waterfall will be debuting in spring of 2017 at Scruffy City Hall, a spectacular three-story crystal waterfall featuring roughly one billion pounds of crystal, something we’ve been promising since SCH opened in early 2014.

That, and Preservation Pub Potty Polisher-in-Chief Scott West will soon see the publishing of his life’s work, the jailhouse trilogy “Recipes for Diaster: The Crook Books, vols I, II, and III.” As you may already be aware, Mr. West spent about four years in a federal facility for the criminally dumb from 2007 until 2011 or thereabouts, in the wake of that dreadful little marijuana/money laundering mishap he and the missus had roundabout 2006.

Never one to waste a Moment, West decided to exit the Big House with more than just a talent for making license plates and a couple of good stories. The resulting three-volume epic will be available soon. Watch this space for details.