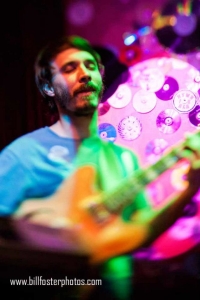 How did the Ganasita reunion come about?

JK: It was Colquitt’s idea (John Colquitt, trombonists and Preservation Pub manager). That and Dunlap (bassist Daniel Dunlap) is going to be in town, and that doesn’t happen very often.

What can we expect from the show?

It’ll be mostly improvised. I’ll be out on the road until two days before the show. And since our drummer passed away in 2014, we don’t have a drummer right now who really knows our material. (Editor’s note: Drummer Will Minnich died of heart failure in spring of 2014.)

Joey (keyboardist Joey Jacard) has been playing with the Burnin Hermans, so we may grab a couple guys from them. It’s going to be kind of a family affair. Some of the Jojax guys may join us, too.

Aside from yourself, what have some of the other former Ganasita members been doing the last year or two?

Well, Joey has been playing with the Burnin Hermans, and raising a family. He’s a lifelong musician, a great player and a creative spirit. Daniel has been studying meteorites. He’s a planetary geologist, working on his Ph.D at Arizona State.

From the beginning, we were good friends, with good chemistry. Outside music, we spent lots of time together, backpacking and road trips. And for a while, it seemed like we were constantly playing together. We were like a family.

Do you have any special Christmas wishes?

I’d like to send love to the family of Lucas Reed, another good friend who just passed away recently, in a motorcycle accident. His brother Dalton played drums with us at one point. Lucas was a good friend and brother.

Ga-na-si-ta and The Jojax will play Saturday, Dec. 26 at Preservation Pub at 10 p.m.