Preservation Pub manager Bernadette West refers to it as “The Claire Stare” — the penetrating, and truth be told, more than a little intimidating gaze that fixes on Claire Metz’s porcelain features whenever she is performing on a stage.

There’s an almost regal hauteur to that stare, a magisterial intensity that seems well-suited to her art. Metz is a Tribal Fusion Belly Dance performer, arguably the most prolific and best-recognized practitioner of TFBD working in Knoxville today.

And whenever she dances — whether it be at a small venue like indie rock hovel the Pilot Light, or on the bigger stages of Bonnaroo — she has that unmistakable je ne sais quoi that holds her audience rapt, caught up in the graceful sweep of her movements, and the ineluctable  tractor beam of that stare.

When she’s not in performance mode, Metz doesn’t radiate that same sort of inapproachable other-ness she projects when she’s on a stage. But she doesn’t come off as a woman who will brook much foolishness, either. And she’s dismissive of the notion that there’s anything special about her demeanor.

“You’ll have to ask Bernadette what that means,” she says with a droll little smile, when asked about The Stare over a cappuccino in a local coffee house. She’s seated in the Old City establishment on a warm afternoon, comfortably dressed in a tank top and a stylish pair of jeans.

Her facial expressions notwithstanding, Metz has quietly evolved over the course of the last 10 years or so into a leader in the local arts community. Not only as an avatar of Tribal Fusion Belly Dance, but as a multi-media performer and collaborator, having worked with musicians and visual artists and dancers, performance troupes of various ilk.

She has also become a teacher in her own right, leader of her own Humaya Tribal Fusion Dance Company and Student Troupe, presiding over weekly classes, for all skill levels, at Broadway Academy of Performing Arts.

“I really do enjoy teaching,” Metz says. “There’s something about teaching this thing that I’m so passionate about, Sharing it with people who are also interested and passionate about it.

“There’s really nothing better than watching people work hard and get better at something that brings them so much joy.”

Metz’s rise as a local arts and dance leader has been on a pretty fast track, all things considered. She’s only 33, and she says that when she first stepped into a Tribal Fusion class at age 19, there were few indications that a promising career in dance lay ahead of her.

“I played basketball in high school, and I always enjoyed being active,” Metz says. “But I don’t think anyone would have described me as graceful. And I would have told you that I couldn’t dance and that I had no rhythm.”

She took that first class on a lark, as a college sophomore, signing up with a friend. The instructor was none other than Sara Griscom, who has gained local renown as a dancer, massage and Reiki therapist, and spiritual counselor through her Gypsy Hands Healing Arts Center. 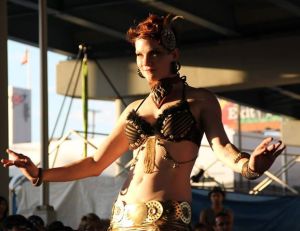 “That first day, Sara was talking about a class performance that was coming up, asking who would be interested in participating,” Metz remembers. “I looked at my friend and said, ‘There’s no way she’ll let me get up on a stage.'”

She was wrong on that count, though it took nearly a year before Griscom deemed her ready for prime-time performance. In the meantime, though, Tribal Fusion Belly Dance became Metz’s consuming passion.

“Oh, it was awesome,” she says, remembering her introduction to the art. “It was kind of a whim, at the start. But as it turned out, I loved dancing, and I loved performing.”

Metz became a staple of Griscom’s Gypsy Hands Bell Dance Troupe, of of the earliest members, and one of the last to leave when the troupe disbanded a few years later.

As she gained experience, she began working in other mediums, collaborating with other dancers and performers. She learned Poi — a Maori dance and performance art involving tethered weights and other props — and fire dancing. She formed the theatrically-inclined Shadhavar, a dance duo with fellow TFBD practitioner Megan Jay, and worked with the Gypsyville Belly Dance troupe during a two-year stopover in Nashville, 2008 through 2010.

Under Griscom’s wing, she began teaching at Gypsy Hands in 2007. All of which set the stage for the founding of Humaya Tribal Fusion in 2011, a few months after Metz returned from her Nashville sojourn. 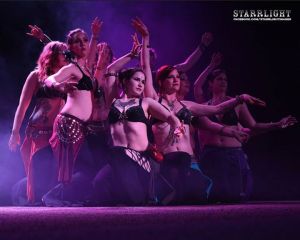 It’s Wednesday evening, at Metz’s Tribal Fusion classes at Broadway Academy, and The Stare doesn’t make so much as a guest appearance over the course of more than two hours of instruction.

About six students have made the trek to the Humaya Advanced Tribal Fusion Belly Dance class tonight. Leader her advanced group through a long series of steps and exercises — turns and swivels and to-and-fros, swan poses and swim movements and contortionist hip gyrations — she is unflaggingly cheerful, her voice a dulcet bell-tone, nourishing her charges — never hectoring — through the rigors of the evening.

“It’s up to me to make my students feel comfortable,” she says, after class has broke for the night. “So it’s important to keep it fun while I’m pushing them to work harder.”

She admits that, “There are times when I might be having a terrible day. And I might struggle to get to class. But once I get here, I always have fun.”

Tribal Fusion Belly Dance is a hybrid dance form, a Western art that combines traditional Middle Eastern and Mediterranean folkloric dance with contemporary dance elements. It is an exacting form — somewhat deceptively so — requiring a mix of stamina, concentration, fine motor control, and a knack for rhythmic expression.

“It’s very technical, but there’s still an accessible element to it,” Metz says. “That’s part of the reason I love it.”

Its roots in a diversity of dance and artistic traditions also makes it an ideal vehicle for collaboration, and Metz has moved effortlessly between collaborations with artists and performers of every stripe. Of particular note over the last few years has been her work with Knoxville’s Hudson K, featuring singer/keyboard player Christina Horn and drummer Nathan Barrett. 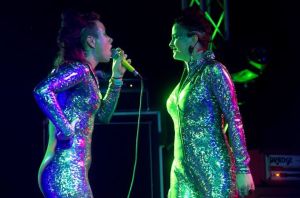 But Horn remembers that, early on, she was daunted by The Stare. “I used to watch Claire spin fire back in the day. She intimidated the crap out of me, this beautiful, powerful woman, dancing and spinning fire. I was just a spectator for a long time.”

Then another local dancer, Ali Blair, invited Horn and Hudson K to take part in a New Year’s Eve show that would also feature Metz and other area performers.

“Everyone came over one night, and we sat and discussed art, music and dance, and how it could all fit together,” Horn says. “And Claire and I really clicked; she was like a sister.”

Initially taken aback by that commanding stage persona, Horn quickly noted the dichotomy between Claire Metz, the performer, and Claire, the teacher and friend. “I got to know her, and it was, oh, this girl is sweet and loving and nurturing,” Horn says. 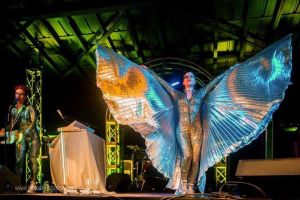 “But she has that presence about her. She is very self-possessed when she is on a stage, and I think maybe I was not so much at the time. I think I ultimately got a lot of my confidence on stage from working with Claire.”

Horn says that Metz has been particularly adept at connecting with, and interpreting her music. Their collaboration — in the form of both live performance and elaborately choreographed videos like “The Knife” — has only grown with time.

Most recently, Metz shared the stage with Hudson K at the 2015 Bonnaroo Music Festival in Manchester, participating in a bravura performance that included multiple costume changes, interpretive belly dance, and even some choreography that featured both Horn and Metz together, gliding and vamping across the stage in matching leather body suits.

It was the seventh time Metz had performed at Bonnaroo, and arguably the most memorable. “It was insanely fun, as well as an honor to be brought along,” she says. “I find Christina’s music to be very inspiring.

“She’s brilliant at creating these beautiful songs, and then brining in other performers to add their own influence and style. It makes for a very integrative, interpretive performance.”

The last year has been a good one for Metz — in addition to the Bonnaroo performance, she received an invitation to fire dance at a fall festival at the Chapel of Sacred Mirrors , a non-denominational church and museum for contemporary spiritual art, founded by author/painters Alex and Allyson Grey.

She describes the Chapel in Wappinger, N.Y., as a sort of giant artists’ compound, set about with meditation gardens and pools and sculpture, art installations in ever corner of the grounds. “It was awe-inspiring, a really cool experience,” she says.

“It was more like a celebration than a festival. It all comes back, for me, to community. I’m big on community, the idea of artists supporting artists.”

“So many different types of arts have come in, with Gypsy Hands and Circle Modern Dance, and now the popularity of Flow arts. Knoxville has expanded its ideas about what makes a show.”