You may have already seen Darby Whatley’s arresting, slice-of-young-life paintings hung in the lounge at Uncorked on Market Square, where Whatley serves and tends bar. Those and other, equally striking works from the 22-year-old artist were on display at July’s citywide First Friday event, hung on the first floor of Scruffy City Hall.

A native Texan, Whatley says she learned most of what she knows about painting from her mother, who was herself a student of renowned Mexican/Yaqui painter Amado Pena.

“I was painting before I can even remember,” Whatley says. “My earliest memories are of my mom teaching me to mix colors. It was always a way of life.

“I was five years old, and she was critiquing my drawings,” Whatley laughs. “She would be like, ‘Look at this; you just drew a blue strip for the horizon. You can’t do that anymore.'”

But for a little girl with a probing intellect and a keen eye for colors, it was probably the only kind of upbringing that made any sense.

“As an artist, I got more from my mom than anyone else,” Whatley says. “In my home environment, we had a Gutenberg letter press, a kiln, a silk-screen press, a welder.

“Nothing was missing. I got to make stained glass windows at 12 years old.”

Which isn’t to say Whatley wasn’t influenced by other artists. She says she loves the work of James Rosenquist, as well as that of Norman Rockwell.

That may seem strange, citing the work of a pop-art pioneer and the 20th century’s foremost traditionalist in the same breath. But in the latter’s case, it was the almost pathological normalcy of Rockwell’s prototypical Americana that captured Whatley’s imagination.

“I always wondered whether he painted the way he did because he was commemorating the American lifestyle,” Whatley muses, “or was it because he felt left out of it.”

Whatley says she finds inspiration in poetry, too, particularly that of T.S. Elliot, whom she says, “wrote about his terribly sucky life in such a beautiful way.”

While Whatley’s work is surely colored by that of her influences  — you can see hints of Rosenquist’s pastel pop, echoes of Rockwell’s keyhole voyeurism — the shadings are subtle. To be so young, she has a remarkably potent and well-articulated visual style, a voice all her own.

A firm believer in paint-what-you-know, Whatley takes as her primary subjects young women much like herself. Her paintings fairly teem with the restless ennui, the voiceless yearnings, the nameless and over-weaning anxieties of girls in their 20s.

“A lot of what I paint is based off foggily-recalled memories, things I saw that I thought would make a good painting, blurry nights,” she says. “I think of it as anonymous snapshots of women in their 20s.

“I think your style evolves over time, with your experience and your contemporaries and your surroundings,” she continues. “Right now, I’d say there’s something juvenile about what I do. But it will develop with time. And it’s refreshing to some people.

“Right now, I don’t necessarily know what a lot of it means, but I feel it’s important to document.”

Her subjects stand in nervous clusters at parties, pass a smoldering roach in the bedroom, pull swigs from bottles of craft beer, their gazes adrift in a haze of boredom and smoke.

Or so it seems, at any rate. Because one consistent theme in Whatley’s paintings is that she prefers to keep the faces of her subjects obscured.

Or else she omits them from the scene entirely, concentrating instead on tangles of limbs, hands, elbows, torsos poised in attitudes of perpetual uncertainty.

“I don’t put faces in my paintings because I want people to be able to insert themselves into the work,” Whatley says. “And I like the idea of having these faceless subjects, but with bodies that are so full of life.”

Her most compelling work, though, has a face — including a pair of haunted eyes that stare out over the top of sunken cheeks and a suffocating mouth gag.

The painting of a slender blonde girl, bound and gagged, arms bent and tied uncomfortably behind her back could almost have been captured through the dirty lens of a snuff-film camera.

It’s an unsettling image, to be sure — a scene straight out of Silence of the Lambs, maybe, or at the very least, Law and Order: SVU. But don’t take it too literally.

What does the painting mean? Whatley offers a two-word response: “Student loans.”

Whatley wants to do things with her art, make a go of it as a career, or at least a serious avocation. And she has a plan, albeit not a very standard one. Her next move, she says, is to move to Mexico with husband/local musician Michael Gowman, and find a pink house on a South Pacific beach.

“I feel like I need a new cultural perspective,” she says. “I’d like to take on something that will add to my style.”

Eventually, she sees herself moving back stateside, to Philadelphia. “And hopefully, I’ll be coming back with a lot of material.”

“I believe when you’re done, you’re done, so you’d better leave something behind. Otherwise, you die a third death.” 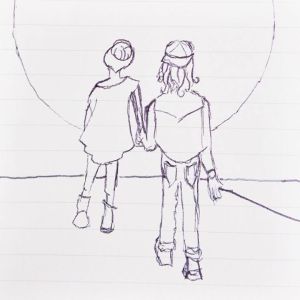