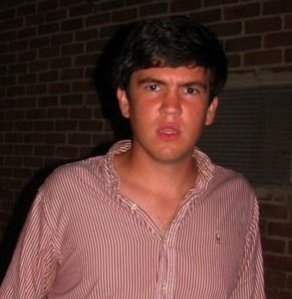 What’s the best joke you know?

It’s Sunday, in a church, and the pastor is taking prayer requests. “My flock, will you tell me what you need?” So Johnny stands up and says, “I need a miracle for my hearing.” The pastor says, “Johnny, my son, come up here.” He goes up front, and the pastor lays his hands on Johnny’s ears, and he prays with the congregation. Then he lifts his hands and says to Johnny, “How’s your hearing now?” Johnny says, “I don’t know, it’s on a Wednesday.”

Batman. The graphic novels tend to be darker in nature. And it’s plausible. Batman’s like some nut with a lot of money. And it’s a more human story. Batman, for a thousand reasons.

If you could have any superpower, what would it be?

What actor would play John Post in a movie?

You’re having a Moonshine Roof Garden Party at Preservation Pub. What three special guests would you like to host?

If you were going to torture someone, how would you do it?

Waterboarding, and electrodes on their nuts.

Who is your least favorite celebrity?

Wayne Coyne. I love the Flaming Lips, but Wayne Coyne is a giant bag of shit.

What was your most embarrassing moment?

I fell asleep at the Pub my third night here, completely passed out at the bar, and Jilly had to tap me on the shoulder and ask me to leave.

Describe your worst date ever.

I liked this girl, and we went out for pizza. We ate, then went back to my apartment to smoke some week, and she was just lame, a @#$ing square. She was a mad square about it.

I can’t print it. I’m pretty sure the statute of limitations hasn’t run out.

“You can’t chase all of your dreams.”