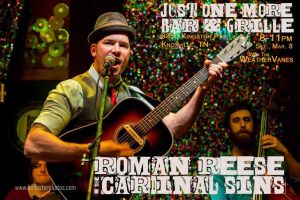 Over the last decade or so, the Preservation Pub’s Tuesday night songwriter showcase has been both catalyst and proving ground for artists who would eventually become some of the city’s most popular performers. Attorney-by-day Americana singer-songwriter Roman Reese is a case in point.

The Nashville native kick-started his career—or at least the Knoxville chapter of it—by connecting with other aspiring locals at the open mic when he came to town back around 2005. The Tuesday night talent pool was especially deep at that particular moment in time, the roster of regulars including a number of soon-to-be in-demand singers and players: Christina Horn; Grandpa’s Stash; Johnny Sexton; Medford’s Black Record Collection…

“I’ve lived in a few different cities over the years,” says Reese, a former military brat who is himself now a veteran of the conflict in Iraq. “Whenever I’ve gone to a new city, open mics are the easiest thing to do. That’s where other musicians go. You can build solidarity with the other musicians, get a few tips, figure out which clubs to play.”

It’s a strategy that’s served Reese pretty well. He’s now respected by fans and fellows alike as one of Knoxville’s best singer-songwriters, and his sometime-backing band the Cardinal Sins includes a few of the players he met back in ’05, including former Medford members Michael Davis and (prior to his departure) Matt Foster.

Having sung and played guitar since he was 15, Reese says it was pretty easy to get a start in his hometown Music City. And though there weren’t any musicians in his immediate family, his extended family—uncles, aunts, cousins, etc.—was full of traditional Appalachian singers and pickers.

“I’d hear them at family reunions, and it was something I always enjoyed,” he says. “We had some great singers in the family, and they did some amazing stuff—shape note singing, that kind of thing.

“I also had an uncle, Jay Adams, who was a big influence. He sang and played guitar, and he was huge for me. He was old enough for me to look up to, but still young enough to be cool.”

Of course, all of that was filtered through the sensibility of a ‘90s kid weaned on Grunge and the Alternative Nation phenomenon. “I was always learning [Pearl Jam’s] Stone Gossard and Mike McCready guitar licks,” he laughs. “Trying to figure out ‘Yellow Ledbetter’ or whatever. I can still play most of the album ’10.’”

His teenage rock ‘n’ roll instincts were reconciled with his family heritage when he heard Bruce Springsteen play “The Ghost of Tom Joad” on a televised awards show. He had heard Springsteen before, and was a fan of singer’s anthemic, arena-ready E Street band material. But on this occasion, seeing him play a quiet country-folk tune in a rock ‘n’ roll context, Reese had a minor epiphany.

Though Reese says he’s “not a genre kind of guy,” his music has a dusky, rural flavor to it, colored by his distinctive voice—a pleasingly weathered instrument that reminds of both Steve Earle and former Knoxville songwriter Scott Miller, with a little bit of Lucero’s Ben Nichols thrown in for seasoning.

In the grand Americana tradition, Reese says his songs are chiefly about “liquor, the Lord, women and war.” Having served as a lieutenant in the U.S. Army Military Police Corps when he was deployed in 2004, Reese exorcises some personal demons in songs like “Come in Operator” and “Bring Your Pistols and Your Guns,” inspired by his time in Iraq.

“One of the few times I can be really honest is in a song,” he says. “When I write, I try to be as honest and real as I can about real experiences I’ve had. When I sing about [the war], it’s like I’m saying, this is not like what you hear on CNN, or what Toby Keith sings about it. This is what it’s really like, when it’s hot and it sucks and people are shooting at you. Most Americans don’t know what blood in the sand smells like.”

To date, Reese has recorded a couple of records—a solo album entitled Gritty City in 2005, and a release with the Cardinal Sins in 2009, Listen Before Dialing. All of which means he’s long overdue for another effort.

Reese says album number three is at least on the roster, if not in the can. “We’re anticipating doing another recording pretty soon, maybe in the fall,” he says. “It’s been tricky, because I’m an attorney, and we have one other band member who’s in law school. So we don’t always have the full group together.

“But right now we have a ton of songs that need recording. If we don’t start pretty soon, we’ll end up with a double album.”