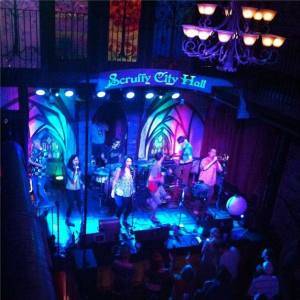 And the winner is…

I’m going to make this quick—for a change—because there is so much more here for you to consider this time out other than my bi-weekly blather. We are in the midst of the Knoxville Film and Music Festival, and we have spoken at some length to several of the principals, with those conversations presented here for your reading pleasure. Please see the rest of this blog for our interviews with filmmakers Damir Ludvig (Papaya: Make Some Noise!), Jeff Krulik (Led Zeppelin Played Here), and South Park producer Eric Stough (6 Days to Air, a South Park making-of documentary). They will all be meeting the public and screening their work in the days to come at Scruffy City Hall, this year’s home of KFMF.

But before we get to the filmmakers, it is necessary that I tell you that Marina Orchestra has been selected as Knoxville’s bestest band, after a hard-fought final round of the 2014 edition of the Band Eat Band contest June 7 at SCH.

Those of you who have read this blog more than once know that I am not an easy man to please. My default setting is marked by an inclination toward cynicism, foul-mouthed discontent, rancor and spite. I dispense compliments with only a little more regularity than your corner convenience mart dispenses billion-dollar Lotto tickets.

That having been said, I have to tell you that the finals participants in this year’s Band Eat Band—Marina Orchestra, the Theorizt, the Crumbsnatchers, Dixieghost, and Far Far Away—were all richly deserving of the final prize.

But I understand, better than most of you, that when all’s said and done, there can only be one winner—everybody else has to go the @#$ home. Those are the sad facts of life, Jake, millennial-era participation awards and trophies-for-everyone be damned.

But the fact of the matter is that this year’s final hosted as damn fine a line-up of bands as has ever graced a stage in Knoxville. And from the soaring stadium-sized Rawk of Far Far Away (the evening’s first finals band), to the achingly beautiful strings ‘n’ harmony of Dixieghost (the show closers), there was not a bum note nor a less-than-stellar showing to be heard all the night long.

If it makes the rest of you feel any better—and I know it probably doesn’t, but them’s the breaks—know that those of us who had to make the choice would just as soon have called it a wash, given everybody a big wad of cash, and split for Vegas and a week of high-rolling, hookers and hash. Heavy is the head, Jake. Thank you all, and godspeed.

4 thoughts on “Downtown Dirt by Manhole: Celebration and Sorrow at Band Eat Band 2014”