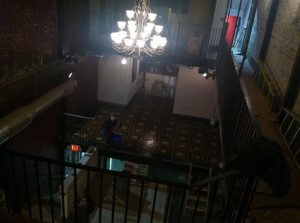 Scruffy City Hall: Gazing down at the altar of the Temple of Beer

So we have now seen the opening of Scruffy City Hall on Jan. 17, and it is good. No, on second thought, f#$k all that. Because that’s how the small-timers roll, the bean-counters and low-ballers and never-gonna-bes who think that “good enough” is, well, actually good enough. It is not, and don’t let anyone tell you different. Our goal is perfection, and we are seeking it with a gnawing and rapacious hunger, as if our very lives were at hazard.

Because maybe they are. You never know with such things. But we are wandering far afield, as we so often do. The point is that Scruffy City Hall is awesome. And it is only going to get better, as the inexorable march of time wears on and the Benefactors implement their plans, in stages, for extrapolating on the wonders of SCH.

Now, I would be remiss if I did not confess, right up front, that there were a few little particulars (Ahem! Much sheepish clearing of throat…) that were less than shall-we-say-ideal on opening night. Most notably the plumbing, as per the function of select toilets on the second floor. It is never a good sign when one sees workers carrying great buckets of water into the lavatory, at intervals. (Not a happy thing if they are carrying buckets out of it, either, but that is another problem entirely…)

But let not your heart be troubled, Jake. Those little details—and others—have long since been attended to. It’s a rough ‘n’ ready way of doing business, and surely not for the weak. But that’s how the Benefactors roll; they like to throw a great may things up against the wall, then make damned sure all of them stick. It takes an iron will, and a whole lot of moxie. Do not f#$k with them, for they are not trifling people.

So forget all the tiny mishaps, the first night was a rousing success, with local bandleader Wil Wright’s birthday bash opening the Hall, and all of Wright’s bands—Weird Miracle, Senryu, and, of course, Harry Potter hip-hop outfit Lil’ Iffy—taking the stage. And not to get all weak-assed and Sunshine Sally on you, but I do believe the single most over-used word throughout the evening was “Wow.”

Wow, for the sheer clarity of the sound at SCH—there’s not a bad spot in the room—which is already arguably the city’s best-sounding hall. Wow, for the on-tap beer selection, which currently stands at 40 craft beers across 28 downstairs and 12 upstairs taps (save for one tap dedicated to Old Style, for you Philistines out there). And Wow, for the sheer magisterial grandeur of the Hall, which, true to Scott West’s own pronouncement, has the feel of a great Rawk and Beer Cathedral.

Since that smash opening, there have been some good nights, and some slow ones. It seems that some haven’t received the word that, yes, SCH is indeed open seven nights per week. And for those who have yearned for an occasional respite from the nightly onslaught of music at our very own Preservation Pub, in hopes of a more relaxed evening of quiet conversation, weeknights at SCH are a perfect potion.

And now, as we kick another January to the curb and go about the business of properly f#$%king up the rest of 2014, let us reflect one last time on the opportunities presented by the coming 11 months. Because it strikes me that the problem with New Year’s resolutions is inherent in the word “resolution.” There is the suffix “re”, which means “again,” and the word “solution,” which suggests an answer.

So in making a New Year’s resolution, we embark on a program whereby we employ an answer we have already used once before, having failed. What’s the chance it’s gonna work this time, Jake? We all know what the definition of insanity is.

Or we could just load up on Boone’s Farm and pork rinds and settle into the futon for a Real Housewives marathon on the Plasma Screen. Nothing like high-def to bring the knurled horrors of botox and bad nose-jobs to life in your very own living room.

Makes that extra 10 lbs. you’re carrying and your forever-dirty car seem a little less problematic, doesn’t it? Remembers, Jake, you can always get there from here. And there are many roads you can travel.