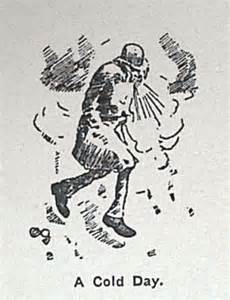 In Hell, no one can hear you shiver.

We have entered that cruel and unseemly time of year known as the Post-Holiday Malaise, my friends. It is known as such because that is what I have decided to call it. And if that reasoning isn’t good enough for you, then I cordially invite you to go f#$% yourself. Let me recommend a flaming hot cattle prod, to properly administer that particular operation…

Scratch that last bit. It was uncalled for, not to mention anatomically suspect. And please forgive any further lapses in deportment. It is a sign of the times, this infernal petulance. Because mid-winter is truly a time of dashed hopes and bleak desolation. The profligacy, good spirits, and pig-shit mad carousing of the holiday season have passed, and the bills have come due. And it is a harrowing tally, Jake, a bitter hash of financial despondency, existential dread and stifling ennui.

So we will try to pull ourselves out of this wretched tailspin, perhaps by counting our blessings, taking stock of those precious parts of our lives which make the mad struggle of it all somehow worthwhile. And we will start, as we so often do, by looking here at home, at our very own Preservation Pub.

At the Pub, and—God willing and the creek don’t rise—at Scruffy City Hall, which draws closer by the day to Opening Night. Mayhap it will have already opened by the time you read these words, if you are reading these words at all. The latter being a notion that I will invest with none of my small and dearly-held faith, given the present climate of fear and desperation.

We have already seen the first round of this year’s much-anticipated Band Eat Band competition, the Pub’s winner-take-all contest extravaganza. The Benefactors have seen fit to open the floodgates this year, permitting bands from far-flung locales to enter the fray, rather than limiting participation to artists hailing from Knox Angeles and its environs.

Round One took place on Jan. 7, with Mobility Chief and the Enigmatic Foe—two relative unknowns—slugging it out for the win. But you know what they say about “unknown,” Jake. Or at least, you should know what I have to say about it. And that’s this: “unknown” is just another way of saying “Awesome in waiting.”

That first Tuesday night contest was taken by Mobility Chief, a curious no-vox outfit that plies a clever brand of instrumental prog-pop, at once succinct, memorable, and deftly rendered. And I know what you’re thinking; you’re thinking that words like “succinct” and “pop” are usually ill-suited to sharing a sentence with the word “prog.” But that’s what makes it “clever,” Jake. Fancy that.

Since the kick-off, B.E.B. has been on break for a couple of weeks, due to prior Tuesday night scheduling conflicts. But the ruckus resumes on Jan. 28, with the Oak Creek Band and Echoes, the next two outfits set to roar and rend flesh in hopes of capturing the Big Prize, cash and bennies and bragging rights, and the abiding sense that one can look down on one’s peers with the sort of sneering alpha-dog disdain that only comes from winning at bloodsport.

In the meanwhile, the Tuesday of the 21st will see Nashville’s Blackfoot Gypsies commandeer the Pub stage. And if you have not seen these fellows vend their wicked brand of propulsive swamp blues in times past, all shaggy tresses and vintage amps and feathered fedoras, then you have truly missed one of the best bands to grace the Pub’s diminutive stage in recent memory.

And what else? The rest of January will also bring us the likes of the Theorizt, on Jan. 18—restlessly inventive, old-school-flavored local hip hop in recognition of the forthcoming MLK holiday—and showcase promotions from Jonathan Sexton (Jan. 25) and Davis Mitchell (Jan. 20), two preposterously talented singer/songwriter/guitarist/band leaders who have been woefully absent from local stages in recent times. And I would be remiss if I did not mention that Pub favorites the JoJax will headline the night of Jan. 31, supported by Columbia, S.C. happy post-metal purveyors Pan.

But our wounded spirits may find no better salve this month—and cross your fingers here, murmur earnest prayers to whatever dark gods hold sway in the temple of your heart—we will find no stronger an unguent for wintry, weather-beaten souls than the opening of Scruffy City Hall at 32 Market Square. It could, should happen any time now; and let us now place our burnt offerings in the appointed place.

I feel better now, if for no other reason than that I have had a chance to share my burden of angst with the rest of you people. The say Misery loves Company, Jake, but that is a rotten fib. What Misery really wants is to pass the buck. Tag! – you’re it. Now go play in traffic