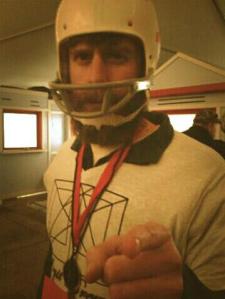 Q: What’s the best (or worst) joke you’ve ever heard?

Q: If you could have any superpower, what would it be?

A: The Batkid, from San Francisco. I have a soft spot for Make-a-Wish.

A: There was one time at an office Christmas party where I was able to finagle many more drink tickets than I was allotted. That was also the first time I ever did karaoke. After the nth round of shots, I decided the guy with the mic wasn’t doing a good enough job, so I walked up and snatched the microphone away from him. He walked off mumbling, “That was my song.” I’m pretty sure I rode home in somebody’s trunk that night.

Q: You’re having a Moonshine Roof Garden Party at Preservation Pub. What three famous guests would you like to host?

A: Dave Grohl; the Dalai Lama; and Pootie Tang.

A: “They call me Steve ‘Moneybags’ Hines.”

Q: If you were going to torture someone, how would you do it?

A: I would hog tie them, pull out all their fingernails and toenails with a pair of pliers while playing them a mix of today’s popular music as heard on the radio.

A: Excessive amounts of pancakes and bacon on a Sunday morning.

A: When you die, your soul slips away never to have contact with the souls you met while living.

A: They opened up for Cracker at 328 in Nashville back in 1995. The lead singer was in a wheelchair, and he played the most depressing music I’d ever heard in my life.

Q: What would you like to put on your tombstone?

Q: Describe your worst date ever.

A: It was my best and worst at the same time. It was great, but it also involved a full-blown panic attack on the Ferris wheel. She melted down. Didn’t tell me anything about a fear of heights. But it ended great–it was the first date with my girlfriend. (Pub regular Rebecca Swain: see previous issues of Scruffington Post.)

Q: What do you think when you look at yourself in the mirror?

A: How do you grow hair so fast?

A: “Hi, my name is [whatever], but you can call me Fred Flintstone.” Then when the girl asks why, you say, “Because I’ll make your Bedrock.” Heard, but never used.

Q: What would you do for your 15 minutes of fame?

A: Who’s to say I haven’t already done it? And why aren’t you paying attention?

A: Someone or something that is more awesome than I can adequately describe, because I am here with all of you.

Q: If you met the Devil, what would you say to him?

A: Maybe you get a bad rap; I don’t know. But if you are responsible for some of those good times, I truly appreciate it.