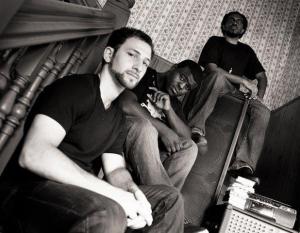 In a world of stifling hip-hop orthodoxy, Knoxville’s The Theorizt stand staunchly in opposition to the status quo.

But think of them as reformers rather than heretics, free thinkers who would stake out common ground between rockers and rap artists, and perhaps put the oft-changing culture of hip hop back in touch with its roots.

Says Theorizt Jarius Bush (aka J-Bush): “It’s been cool to bridge that gap, between people who enjoy live instruments and live music but aren’t necessarily hip-hop fans, and people who maybe enjoy hip hop but don’t necessarily like live music. We pull people together. That’s our mission statement.”

The Theorizt will take part in a triple bill at Preservation Pub on Halloween night, with local synth-rockers Hudson K and Pennsylvania indie outfit Hiding Scarlet downstairs in the Smokeasy. Their portion of the show will also feature music from the Plunderphonics, another J-Bush project featuring D.J. Wigs and Lane Shuler. The Plunderphonics are releasing their first EP.

A local rapper and bedroom mixtape artist for 15 years now, Bush met producer Mike Miller about four years ago, and the two began laying the foundation for the Theorizt. They started producing hip-hop tracks with four-piece band arrangements, and soon pulled live instrumentalists into the mix.

“I like hip hop a lot, but a lot of my influences came from other genres,” Bush says. “Alternative rock, Red Hop Chili Peppers; Tool. And one of my biggest influences was N.E.R.D., a [rock/hip-hop hybrid] project by Pharrell.”

And those expansive listening habits bred a more expansive approach, Bush says. “One thing we brought to The Theorizt is the idea of thinking outside the box, of seeing reality different from the groupthink. And also different from how typical hip hop looks at things—the ‘clubbing, hollering at bitches, getting money’ approach.”

The group’s lineup has changed several times since those early days in 2009; Miller moved away, though he still produces Theorizt tracks. And Bush is now teamed with poet/rappers Courageous and Black Atticus; bassist John Augustus; guitarists Andrew Powers and Justin Cipriani; and drummer Jamarcus.

What hasn’t changed is Bush and co.’s approach, which integrates live instruments with hip-hop beats, and which is also marked by a robust appreciation for the craft of the spoken word. “Atticus and Courageous are both spoken-word poets, and I try to be poetic in my lyrics as well,” Bush says. “That’s one thing about the band. All the guys in the group are great writers, and we all have our different styles.”

But it isn’t always easy, being in a band that at once pays homage to jazz and rock, live music, and the bedrock funk and soul sounds that are the foundation of rap—and uniting all of those elements under the notion of a contemporary hip-hop outfit.

“What makes it hard is that we do a more traditional form of hip hop,” Bush says. “And because some of us are black, there’s a social idea of what the music is ‘supposed’ to sound like. Especially in a town like Knoxville, where hip hop isn’t as popular, except among the younger generation.”

But when The Theorizt connect with their audience, the results are gratifying. “One of the best compliments we get from people is, ‘I didn’t like hip hop until I heard you guys,’ “ Bush says. “One guy said, ‘I can’t stand hip hop, but I respect what you do.’ That meant something.”