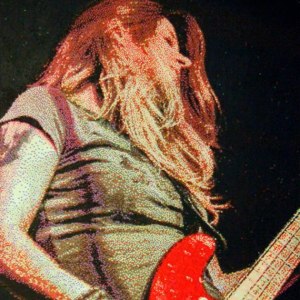 A horse walks into a bar and walks up to the bartender. The bartender looks at him and says, ‘Why the long face?’

2. Who’s your favorite superhero, and why?

Spider-man. Because he’s an underdog, and a geek. He didn’t ask for his power, it was thrust on him. Plus, he’s really cool. He has the web, and all the moves. He’s Heavy Metal.

3. You’re having a Moonshine Roof Garden party at Preservation Pub. What three historical or fictional guests would you like to host?

Who wants to grow up?

I have to keep that a secret.

6. If you were going to torture someone, how would you do it?

Now we’re talking. There’s this little town in Italy with a museum of Medieval torture instruments. They have this rack where you’re hanging down, but your knees don’t quite touch the floor. You’re on your knees, but you can’t quite put weight on them. And the machine rips the muscles first, and then the bone. And you die of agony. That’s exactly how I’d do it.

The Outfield, and the song “Your Love.”

Whatever you’re afraid of in this reality. My Hell is stasis. Being unable to move, not having the freedom to move–in every sense.

9. What would you put on your tombstone?

10. What do you say when you look at yourself in the mirror?

13. If you could invent your own designer drug, how would it make you feel?