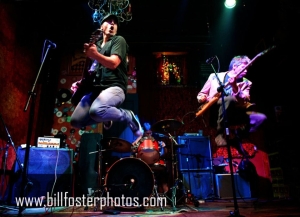 Summer’s end is always a time of melancholia, the waning of yet another season of laughter and greenery and warmth; it’s Mother Earth’s wistful reminder of the fleeting nature of it all, as if to contrast Time’s constant and eternal Flame with the sad, sweet, momentary flickerings that constitute each of our passing lives…

But there are consolations, Jake, and one of them is football. Nothing dispels a bad case of existential angst complicated w/seasonal affective disorder like watching mini-Cooper-sized men lumber up and down a 100-yard field, mashing each other into insensibility and permanent orthopedic decrepitude.

Football, to ease our pain, and Rawk, too. Because the students are back now, after a long summer break, and the nightlife is heating up again downtown. Especially at our very own Preservation Pub.

Things started sizzling in late August, with the Pub’s Mercury Theater reunion show—a night of music performed by mostly grizzled vets who were once onstage regulars at the previous incarnation of 28 Market Square, back before our beloved Pub took root in the early 2000s.

The old Mercury was a veritable ‘90s post-punk institution hereabouts, a home for malcontents of every sort. Former Black Flag guee-tarist and SST Records svengali Greg Ginn played a positively epic show there once upon a time. Local, and lamented y’alternative staples the V-roys played plaintive sweetness on many a starry night, and homegrown indie heroes Superdrag snapped and crackled so much perfect pop within the confines of those four walls you can still hear the ghosts of tuneful reverberations past if you listen close on a quiet day…

But make no mistake, the night of Aug. 31 was given over to Rawk, in its purest form. Even Scott West, Entertainment Director here at our very own Preservation Pub, got in on the act, with his punkish power trio Just Say Maybe, an outfit that played the old Merc in a couple of other incarnations.

Warming up the evening’s crowd were the four-piece Pegasi 51. Back when, Pegasi brought the thunder with a scarifying mix of Bauhausian goth, heavy industrial and alt-metal. Nowadays, they’ve streamlined their sound, cleaving to a melodic but still stirringly authentic brand of old-school punk that continues a mad pogo through the innermost vestibules of the mind long after the show is thru.

Next up was the band Finkelstein, which features members of several former Mercury regulars. Guitar heroics abounded, courtesy of former Hypertribe axe mangler Manning Jenkins, as did sturdy riffology that recalled the best of ‘90s hesherdom, when Jerry and Kim and Stone were bending ‘70s punk and proto-metal into new and exciting configurations.

And closing the evening out were ‘80s punk survivors Teenage Love. Those fellows are older than buried dirt now—which is to say they were God’s disreputable bad neighbors back in olden times when the Almighty was just another snot-nosed Kid on the block, with strict orders to stay away from the house next door, the one with the shit car in the drive and the empty bottles of cheap whiskey scattered thick and wanton across the front lawn.

But they still bring a terrible noise, singer Russ Harper caterwauling like a demonic elf on a bed of nails over the band’s unholy din.

The night’s sharpest set, tho—and we’re not just saying this because he pays the bills around here, my friend; wouldn’t be ethical, no—the evening’s biggest pop came from West and his cohorts in Just Say Maybe, guitarist/singer Tom Appleton and newly christened drummer Andy, who adds a youthful kick to the band.

Not that West and Appleton need it much; they’re a couple of perpetual-motion mother-@#$ers, those two, pulling off tandem stage moves and synchronized leaps like speed-addled pogo freaks half their friggin’ age, which is…

…Well, just never you goddamn mind that anyway. Point is, it rocked.

And now we have the 10th anniversary of the Pub’s singer-songwriter showcase to look forward to on Sept. 17. Which may not seem like so much of a Big Rawk celebration, a la the Mercury throwback throwdown, until you consider all of the local talent that spent time in the woodshed onstage at the Pub’s open-mic showcase.

Jonathan Sexton, he of the Big Love Choir, whet his chops there, as did hip-hop and neo-funk badass Jaystorm, and Irish punks Cutthroat Shamrock, too. And it is said that on many an otherwise uneventful Tuesday even-time, a very young Jon Worley would straggle in with his keys and his harp in tow, and lay down naught but the Holy Truth in epic jam sessions with Niles Haury, beatnik bass god fresh off a two-song set with his then-fledgling Grandpa’s Stash.

Now, if these things I have been trying to bring to your attention here seem weird and unfamiliar to you, then by all means it is time to cut off the tube, get up off your well-marbled ass and join the rest of us out here to see what all the ruckus is about. Because it is Fall, goddamn it, and things are happening, at a pace to fast for the untrained eye to track with any real precision. Because if God hadn’t meant for us to go out on game nights, He wouldn’t have given us bar-top plasma sets and DVR